Real-time PCR (RT-PCR) or quantitative PCR (qPCR) is a method used to analyse RNA expression, to measure quantitative changes in gene expression in response to changes in the cells environment. After RNA has been isolated, reverse transcriptase is used to translate the RNA into complementary DNA (cDNA) copies for further PCR amplification and quantification. The cDNA is then mixed with either SYBR green fluorescent dye or a TaqMan Probe. SYBR green emits a strong fluorescent light when it connects to double stranded DNA (dsDNA). This means that the more dsDNA is present in a sample, the stronger the SYBR green signal will be. By amplifying the cDNA via PCR amplification, and quantifying the strength of the fluorescent signal after every amplification cycle, it can be plotted on a graph, which compares signal strength against number of amplification cycles (Ct, the number of cycles needed for a fluorescent signal to be detected). If the polymerase and primers are effective, this produces a exponential curve, from the time in which the machine used starts to detect the sample until the signal saturates the detector (meaning that the detector can no longer distinguish the gains in fluorescent light). By comparing these results to another sample result one can calculate the relative expression.
TaqMan probes can be used instead of SYBR green fluorescent dye. The probes need to be designed to be able to anneal to the sequence of interest and then when that sequence is amplified by PCR, the probe falls off and emits light. The more strands the probe is able to anneal to, the more probes fall off during amplification, and thus a stronger light is emitted that can be quantified like the SYBRgreen dye. Unlike SYBRgreen dye, many TaqMan probes can be used simutaneously in a sample, as each probe is specifically designed to anneal to a specific sequence and emit a different light signiture. That way the detector can distinguish one signal from another and each light signiture in the sample can be analyzed in one go.
qPCR can also be used to quantitativly measure the gene copy number of a sample. In this scenario, a DNA sample is used instead of RNA. By comparing the amplification graph to another gene with a known copy number, we can estimate how many copy numbers are present in the DNA of interest compared to the gene with known copy numbers. If they both have the same copy number, we would expect the amplification curves to be the same.

Pros: easy work flow and relatively fast results.
Cons: Can only detect known sequences.
Examples of uses in the field
~ used to detect presence of Covid-19 in a sample.
~ check if a mutation in a gene affects RNAs splicing. 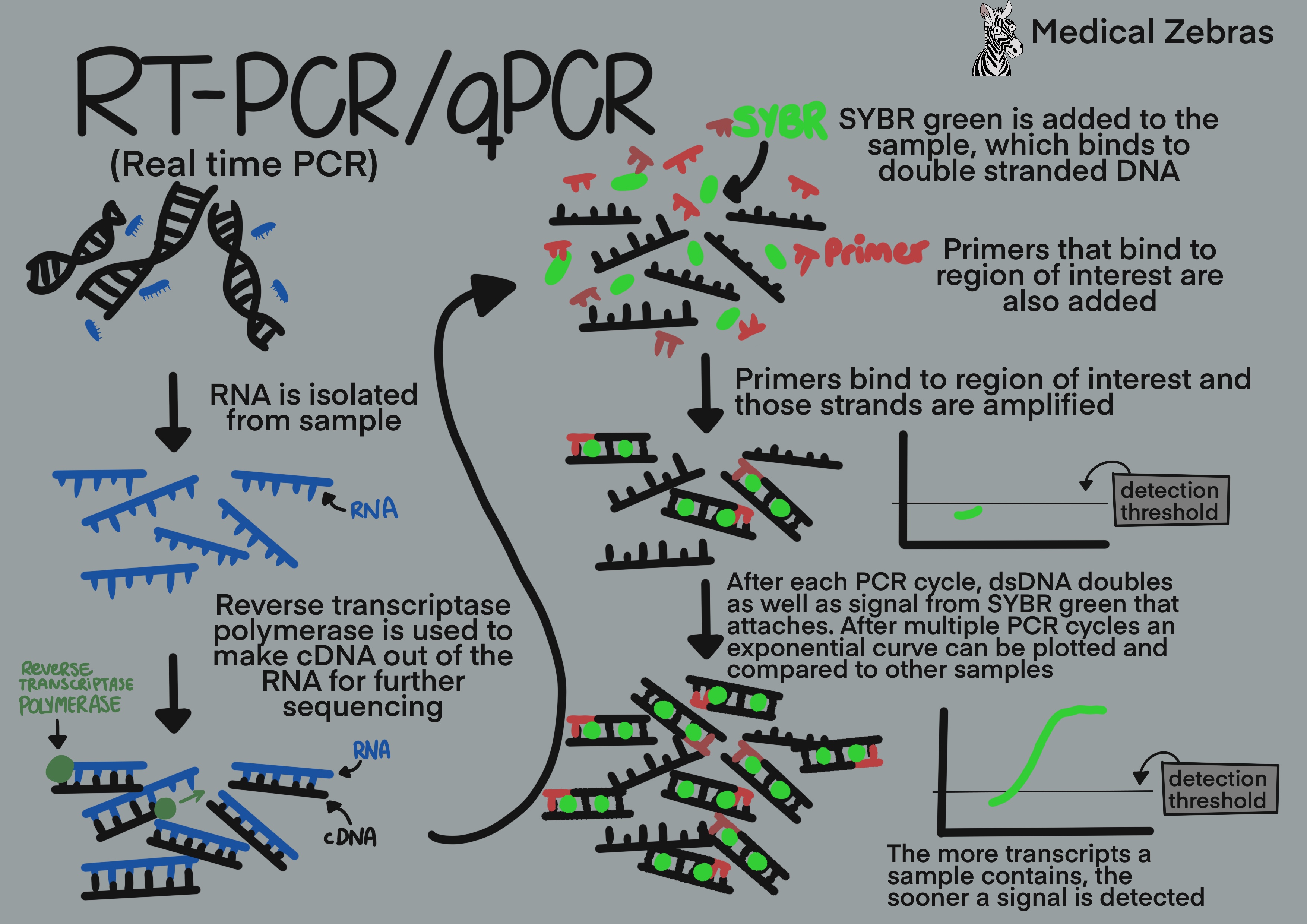 RNA sequencing is a technique to identify and quantify RNA transcription. RNA is isolated from a sample and thereafter a reverse transcriptase is used to make a DNA copy of all the RNA. The DNA created is called cDNA. The cDNA can thereafter be sequenced as a whole on a NGS platform. It is also possible to isolate certain types of RNA from the sample before cDNA production by using magnetic beads that bind to the RNA of interest, and thereby only examining for example mRNA.
cDNA production is vital as DNA is more stable for sequencing compared to RNA. Before sequencing starts, the sample is fragmented most often by sonication or restrictions enzymes. After fragmentation, the sample is size selected and the fragments of the best length selected for further sequencing.

Pros: Whole transcriptome is analysed.
Cons: Expensive.
Examples of uses in the field
~ Can be used to analyse variants of unknown significance (VUS), to see if these mutation affect RNA transcription. For example to see if RNA splicing is affected.

Northern blot is a method to detect RNA in a sample. First RNA is isolated from a sample, then the RNA is separated by gel electrophoresis. A nylon membrane is then placed on-top of the gel and by capillary-action the RNA is transferred over to the membrane. The membrane is most often positively charged, making it easier for the RNA to stick to it, as it is negatively charged. While the transfer is in action the gel and membrane are covered in a certain transfer buffer containing formamide. Formamide is used to allow for easier RNA-probe annealing later on in the analysis at low temperatures (this limits the need for high temperature, which can damage RNA). After transfer the RNA is incubated with RNA-probes that contains a sequence corresponding to the RNA of interest and is tagged with either radioactive isotopes or chemiluminescence. By later X-raying the membrane, the attached probes can be identified and the strength of the signal can be quantified.

Pros: Can be used to detect alternately spliced products.
Cons: Can only analyse one or a couple of RNA sequences at a time. Time consuming.
Examples of uses in the field
~ Not used in the clinical setting.