Chromatin confomation capture (3C) technologies are used to identify DNA interactions in the nucleous. These technologies are 3C, 4C, 5C, ChIA-PET and Hi-C. They all involve crosslinking the DNA in the hopes of capturing chromatin interaction. Thereafter the DNA is fragmented, often by restriction enzymes or sonication, forming DNA fragments with free ends. These free ends can then be ligated, so that the two chromatin strands that were interacting bind one another, forming only one strand that can later be sequenced. These strands that form are called chimeric DNA fragments, as the fragments are formed by fusion of DNA from two or more loci.

ChIA-PET is a method developed to better understand the 3-D structure of the genome and how chromatin interactions play a role in transcription regulation. This involves first cross-linking the DNA, so that DNA regions that are in close proximity get cross-linked together, along with proteins that interact with the DNA. Thereafter the DNA is fragmented by sonication and immunoprecipitated with an antibody that attaches to the protein of interest (Antibody that attaches to the protein of interest and DNA that is attached to that protein is isolated from the sample). Thereafter the sample is divided into two aliquotes and one type of linkers are added to each aliquote with specific sequence that can be identified later during analysis. These linkers attach to the free ends of the DNA fragments. After mixing the aliquotes together again, the linkers self-ligate to proximal linkers, forming DNA loops and thereby capturing what parts of the chromatin have been in proximity to the protein of interest and other chromatin. The DNA sample is then cut with a restrictive enzyme so that the DNA loops now form strands, that can be prepared for further analysis and sequencing. After sequencing the strands, the strands that contain two linkers of the same type are identified and the sequences on either side of were the linkers attached aligned to the genome. Thus identifing which areas of the DNA have been in close proximity to one another. 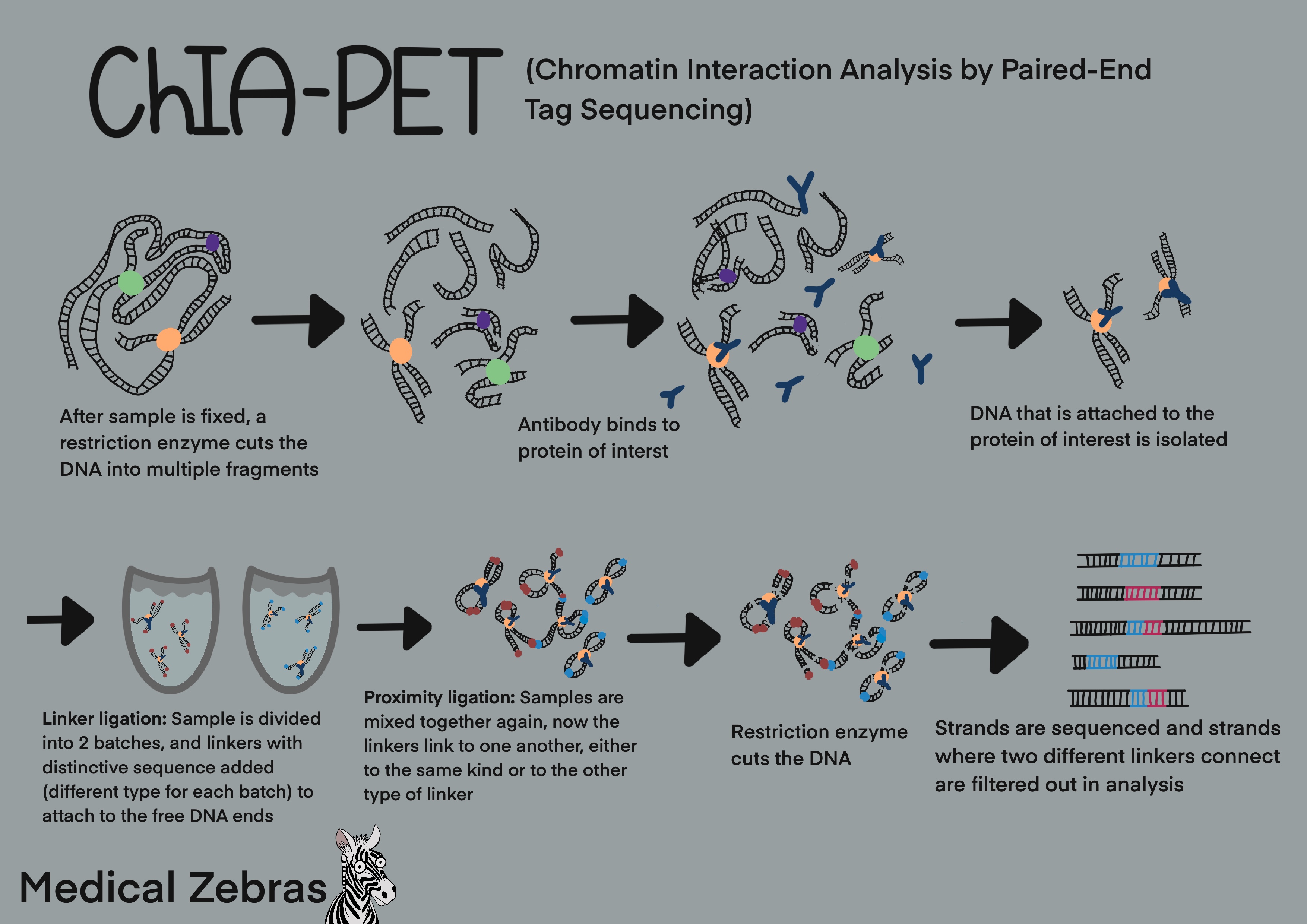 Pros: Can be used to detect both long-range and short-rage chromatin interactions for the protein of interest.
Cons:
Limited sensitivity and large amount of cells needed (>100 million) Examples of uses in the field
~ Not used in the clinical setting.

ATAC-seq or Assay for Transposase-Accessible Chromatin using sequencing, is a method used for investigating chromatin accessibility. A hyperactive mutant Tn5 transposase is added to a DNA sample. This transposase cuts double-stranded DNA where it is accessible (not bound around histones). As well as cutting the DNA the transposase inserts adaptors to the DNA. These adaptor tagged DNA fragments can then be isolated, amplified and later sequenced for identification. Regions that are more often sequenced and identified, correlate to a more open chromatin. Meaning that the transposase had more frequent access to it compared to other areas of the genome.

Pros: a relatively fast and simple analysis.
Cons: Tn5 transposase has a sequencing bias that can affect the end results (it does not insert itself into DNA at random).
Examples of uses in the field
~ Not used in the clinical setting. 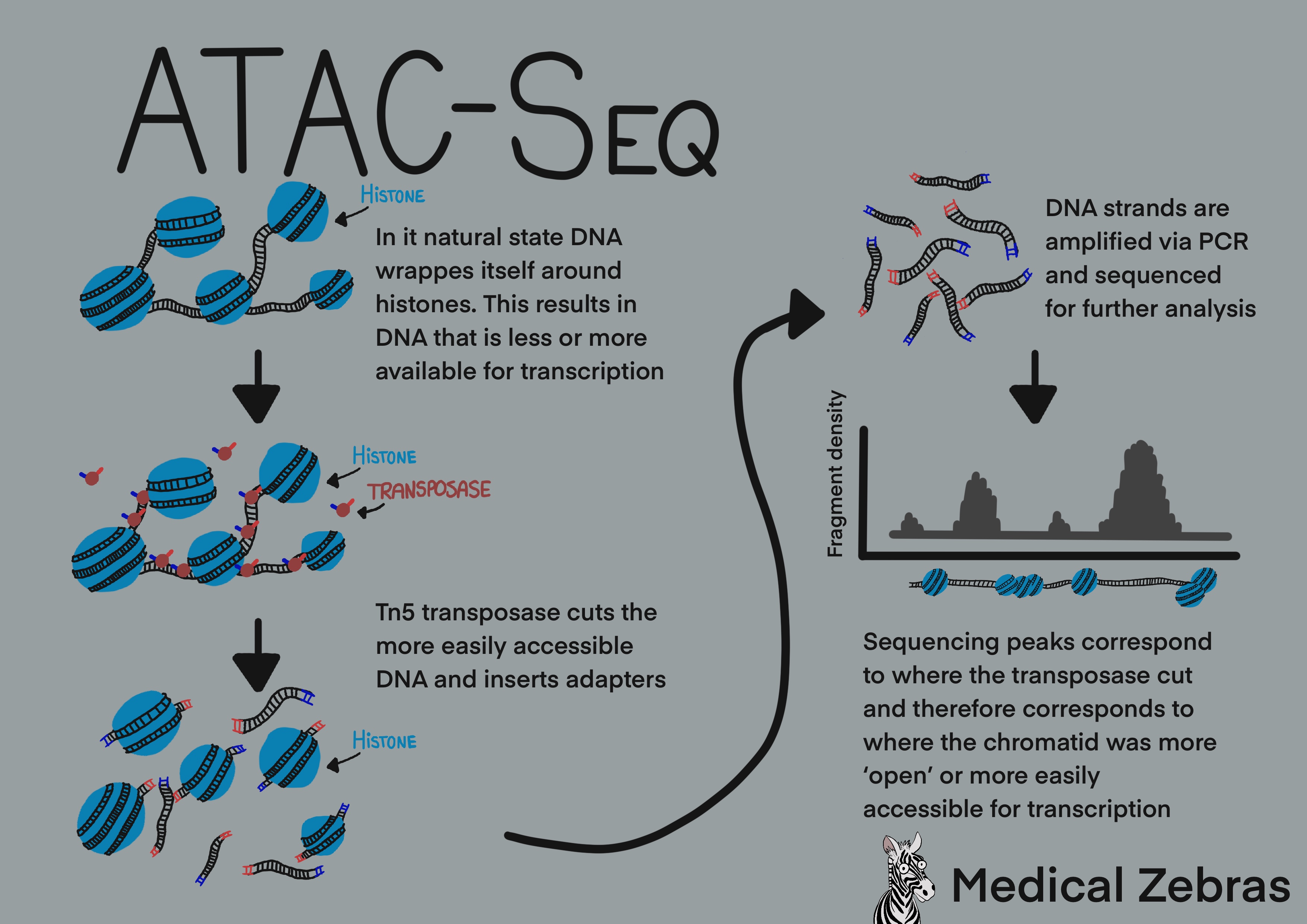